All organisms need food, water and oxygen for the survival. They need to transport all these to different parts of the body.

Animals also need to transport all the wastes to the parts from where is can be removed.

Our circulatory system consists of the following:

Heart and blood vessels function to transport substances and together from the circulatory system.

Blood consists of a fluid medium called plasma in which the cells are suspended.

Plasma transport food, carbon dioxide and other nitrogenous wastes that are suspended in our body.

Oxygen is transported through haemoglobin present in RBCs.

The main features of the heart include:

Sphygmomanometer measures the Blood Pressure (BP). There are 2 limits of BP: Higher limit and lower limit.

The main functions of the heart in circulatory system includes: 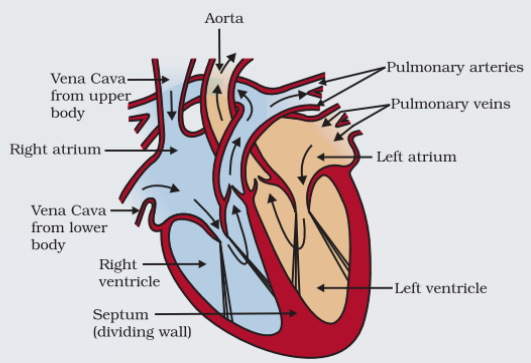 Step-wise explanation of the process is given below:

Animals with Different Chamber in Heart